December 2022 Four Corners Focus contribution by Matt Wanda
Hi, my name is Matt. I recently graduated from Fort Lewis College with a bachelors in geology and I’m a big rock nerd. However, I wasn’t always like that. I grew up in Illinois and wasn’t exposed to a lot of geology or rocks. To me, rocks were simply an inconvenience because each spring I spent long days combing through my parent’s corn fields “picking rocks” so they wouldn’t damage the plow. It wasn’t until I traveled to New Zealand and saw the large diversity of geology there that I became interested in earth processes.

In 2020 I moved to Durango to study geology and became more interested in rocks because I understood what an important tool they are to geologist. However, it wasn’t until I took Dr. Gonzales mineralogy class that I became truly amazed and obsessed with rocks. For me, what makes rocks/minerals so intriguing is that they are the basic building blocks of our planet and yet incredibly varied, beautiful, and useful! Each rock tells us a story about the Earth, such as the environment and climate of the Earth when the rock formed. Sometimes it tells us of a massive catastrophic volcanic eruption or of a peaceful ocean beach where we can find fossils of the creatures that once lived there. The most practical part of minerals is that each one has a unique chemical formula, which humans exploit in order to extract certain elements. Today there are only two elements on the periodic table that humans haven’t found a use for! Everyday items that we simply buy at Walmart and take for granted are made from these colorful, geometrically mesmerizing, natural substances.

The last two summers I’ve spent my free time exploring abandoned mines and rock hounding. My favorite mine is the Cashin mine located on X4 road which runs along La Sal Creek between the towns of Bedrock and La Sal. It’s a sedimentary hosted copper-silver mine that was active off and on between 1898-1981. The drive through the canyon is beautiful (high clearance vehicle recommended). The eroded sandstone cliffs take on intricate forms and there are many abandoned structures along the way. The road dead-ends and from there the mill and mine workings can be found across the creek.

Minerals which are found include: native copper, native silver, malachite, azurite, chalcocite, covellite, chalcanthite, and others. My favorite part about this mine is the open adit that is located on the cliff shelf above the mill. It is relatively safe if the proper caution is taken. Inside there are walls and ceilings covered in bright blue and green chalcanthite. Even though it is tempting to collect this beautiful mineral, I wouldn’t recommend it. Once it leaves the damp underground environment, it will dry out, crumble, and lose its color. However, the dump piles still offer great collecting and I always find a couple rocks worth collecting every time I visit.

I would also like to use this opportunity to thank everyone who volunteers their time and energy to run the Gem and Mineral club. It has offered me great resources and tools to improve on my new found hobby. Plus, being able to interact with people who share similar interests is important in maintaining a sense of community. Inside the Cashin mine workings where chalcanthite is coating the drift. 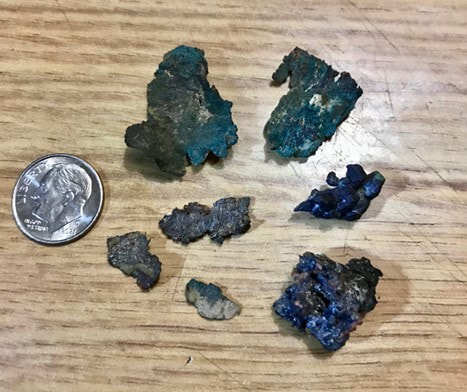 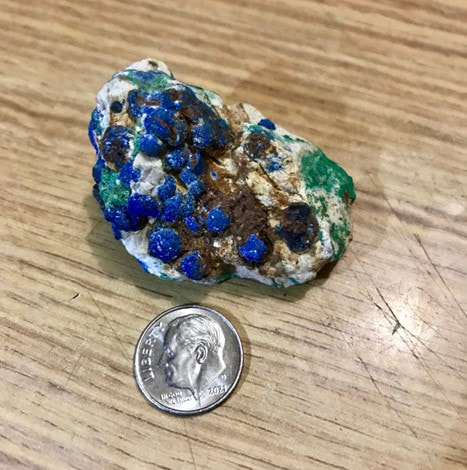 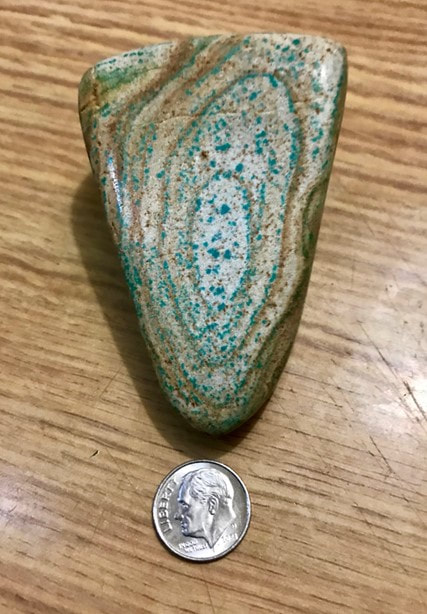